In my previous posts, I’ve demonstrated that the original Hebrew of Genesis by no means confines us to a young-earth paradigm and that either the universe at large is very old, or else God has deliberately engineered it to lie to us. But what about the earth itself? Maybe “the heavens and the earth” are old, but the earth in the sense of a body suitable for life is only 6-10,000 years old.

Unfortunately, that doesn’t fit with the evidence either. Here I’ll be a bit lazy and quote from “A Biblical Case for Old-Earth Creationism,” by Jon W. Greene on the Evidence for God website:

The truth is that many geological features of earth simply do not support the YEC flood-geology model. Christian geochemist W.U. Ault writes, “The serious Bible student will not seek to support the physical aspects of Bible history with pseudo-science.”45 Conservative theologian Wayne Grudem comments: “[I] am not persuaded that all of the earth’s geological formations were caused by Noah’s flood rather than by millions of years of sedimentation, volcanic eruptions, movement of glaciers, continental drift, and so forth…its advocates have persuaded almost no professional geologists, even those who are Bible-believing evangelical Christians.”46

Young-earth creationists focus an enormous amount of effort on disputing the radiometric dating methods as inaccurate–at least, when they don’t like the results, since they’re perfectly happy to accept the results when it comes to archaeological artifacts that confirm Scripture, like the dating of the Dead Sea Scrolls. But fine, let’s ignore that data for the moment and focus on something else which is a bit easier to understand: Ice-core studies.

Almost everyone knows that you can measure the age of a tree by counting the rings in a section of its trunk. This is because the annual weather cycle results in distinct growth periods, which in turn leave their mark on the wood. Glaciers have a similar cycle–most or all of the snowfall that they are made of falls in the winter, with some partial melting in the summer, resulting in distinct layers similar to tree rings. We can further prove that this cycle is being understood correctly by comparing volcanic ash trapped in the ice to known volcanic eruptions. For example, in an ice-core sample taken in 2009, we find ash that matches that from the eruption of Mt. Vesuvius in 79 CE exactly 1930 layers deep. This means that we’re not just guessing the rate that the ice layers accumulate, but have empirically proven it. 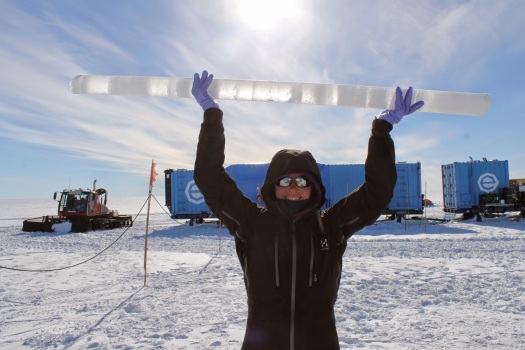 Scientists use the air, ash, and other material trapped in these ice cores in all sorts of fascinating ways, but for now, I want to focus on one simple proof. As Jeff Zweerink from Reasons to Believe notes:

Greenland ice cores date back only 100,000 years because of how much the ice flows. Antarctica, on the other hand, is much colder and the ice more stable. Thus, previous teams have extracted Antarctic ice cores dating back 420,000 years at Vostok Station and almost 800,000 years from Dome C.

But it gets worse. First, since we can calibrate the cores using volcanic eruptions for the last couple thousand years, the numbers are even worse than that. Second, YECs usually insist that the Biblical flood must have covered the whole earth up to the high mountains–so why can’t we see the evidence for that in the ice cores?

This is just one of many evidences that the earth is extremely old. Ice core analysis just so happens to be one of the easiest to illustrate. Granted, it doesn’t get us up to 4.5 billion years by itself, but it does prove beyond a doubt that the earth cannot be just 6000 years old–unless, again, God created the glaciers in place (and apparently did so after the Flood) with layers in them to trick us into thinking that they are far older. This isn’t an issue where belief in special creation rather than “uniformism” make a difference. If God wanted to convey to us that the earth was young, we should see a single packed area of ice (from the original creation) followed by only 6,000 to 10,000 layers.

We have seen already that there are hints in the text of Genesis itself, as well as in later Biblical passages like Psalm 90, that the creation days were not normal 24 hour days. We have seen that for us to see the light of distant galaxies, the universe as a whole must be older than 6000 years. We’ve now seen that the earth exhibits evidence of being older than 6000 years. So why is there an argument?

Belief that God took 13.8 billion years to shape the universe and 4.5 billion years to shape the earth and its lifeforms seems wasteful to YECs. If the whole point of physical creation is humankind, then it seems incredibly wasteful to them to have a creation period of billions of years. Surely God could just make it all in an instant! True, but what if there are advantages to taking those billions of years? In the next post (or two, if it gets long), we’ll discuss why God might take his time in creating and ordering the universe and discover that those reasons are tied into the purpose of the heavens as described in Romans 1: to display the Creator’s power and even his nature.